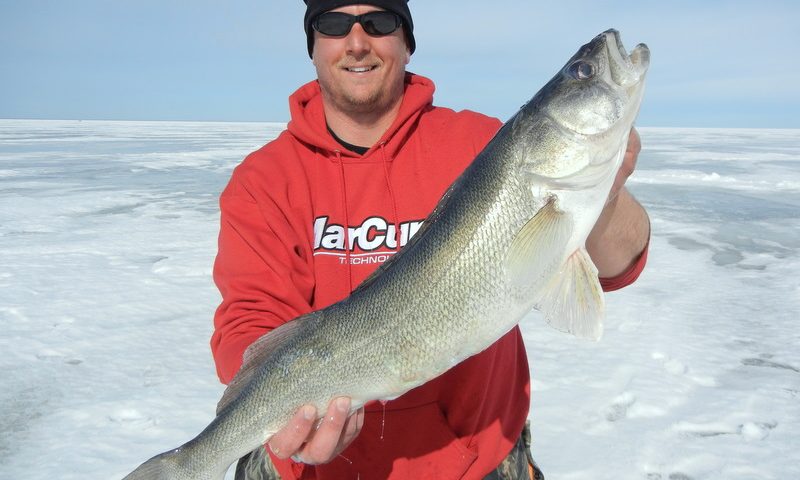 We are really truly blessed to have a “little” Chunk of Heaven up here called Lake Winnipeg right out our back door. It also amazes me,  the diligence needed to stay on the greenback walleye bite from year to year. Many of my guests  are under the impression that we have some sort of “structure” to fish, or a depth chart or some sort, that any experienced walleye guy could take a glance at and find the fish. That we have “go to” spots year in and year out that always hold fish, but  they see for themselves the first time they get their first glance at the massive sheet of snow, Ice and Ridges before them. The endless expanse of lake Winnipeg can really be intimidating on your first trip and even more intimidating if it is your second trip and your first ended in a very poor showing when others back at the lodges reported wonderful catches.

In the short 5 – 6 years that I have been ice fishing Lake Winnipeg I have learned a ton about the fish, their movements,  how to look for them, and where they should be based on the conditions such as water level, water clarity and current flow from the mighty Red River and Winnipeg Rivers. Each year the season ends and you evaluate the year, what you did right and what you could have done differently and as is the case every year you have triumphs and well … lets call them learning experiences lol.

I really feel, more than ever before I am starting to gain a good understanding of how the Walleye in our system move , feed, and congregate based on the conditions thrown at them. Our system changes from year to year and spots that were hot last year are barren this year as was the case early on. In 3 short years we have seen a complete shift of fishing pressure for one side of our massive water body to the other and then back again. This is where local knowledge and experience  is important and their is no substitute in the world for recently acquired time and on the ice.

This year was fabulous for Lake Winnipeg Ice Fishing and the numbers and size were back in full force. It didn’t take long to figure out that last years patterns and areas were not paying off, at least not long term and some of the areas that produced in years past were on fire again this year. Had some outstanding trips with big number and big fish and unfortunately the season was cut short due to a record warm front reaching temps of +26 degrees and over night lows of +17.  I had to cancel several late march trips due to sketchy ice conditions which was unfortunate, but the trips that went forth through the year were spectacular.

Live Targets, Chubby Darters and a variety of lip-less minnow baits were again hot  but spoons made a big come back this year and on many occasions they were the hot ticket of the day. Especially to get the big Walleye to bite on a throw back presentation. On many occasions the bite was awesome and I had several of my Blackwater Cats Ice Eye’s guests landing limits of eaters, plenty of walleye in the 5-7 lbs range and a few trophies to boot. 80 – 90 fish trips with guests landing between 10 – 20 walleye per guests per day always makes for great fishing.

We are in a situation where we would normally be on Lake Winnipeg Ice Fishing, but instead are actually going to be launching the boat and fishing open water before the Manitoba season closes on March 31st. 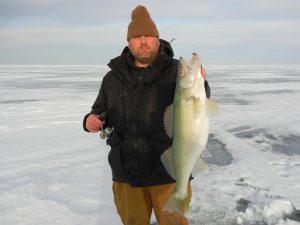 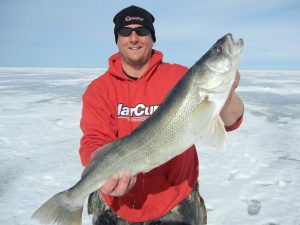 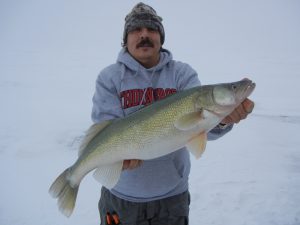