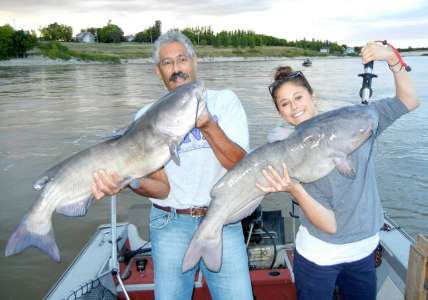 Finally after 4 months of ridiculously high water the Red River has subsided and the channel catfish bite has turned on in a big way. We have been getting awesome numbers of big fish and boy is they fat. This is the time that catfish start to feed heavy and fatten up for winter however there is more to this story that meets the eye. These cats are not just full of food, many of them are full of eggs! Yes you heard me right eggs in September! 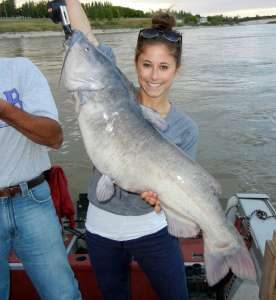 Ok lets back up a bit, traditionally in a normal year on the Red River with normal water levels our channel catfish will spawn in late June early July as a guideline. With many years experience targeting channel catfish and working as a catfish guide I have noticed that a number of key things start to happen during this spawn period. First off the bite tends to slow down overall. The hot spring bite will start to tail off and many of the anglers that were doing so well fishing for cats will start to wonder where the fish went. We will start seeing a lot of skinny muscular males that are a deep blackish blue color and lighter colored females, almost pinkish, that are fat and round.  Also if you turn the fish over the females will have a red swollen opening below the anal opening while the males will have a protrusion pointing towards the tail. This is easy to see and identify during the spawn and not so evident the rest of the year.

This year we did experience a channel catfish spawn of some degree in that late June/July time frame but was not like you would expect. Whether the cats were getting ready to spawn and simply didn’t or a portion of them spawned and the rest waited until the water dropped to decent levels I can’t say. What I can say is that the river is ON FIRE right now with the best cat fishing for the year and there are also large numbers of fat female catfish, full of eggs ready to pop, being caught all over the river right now. The only way to explain it is to just understand that nature will adapt. The fishing world gets it’s ideas and theories about what should happen and when it should take place based on experience and we start to believe that these fish are going follow the script. As if somewhere long ago a bunch of anglers decided when fish should spawn and the fish followed suit. In years where conditions are not ideal for whatever reason the fish will adapt. 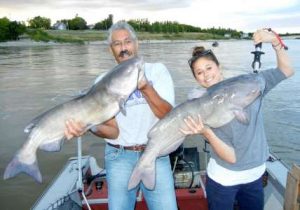 A good friend and fellow guide Jan Bass was out last week and had a killer day for cats.  He indicated that he thought the cats might be spawning right now. Then on my next trip out I had one of my guest hook up with and land what I thought was going to be a massive channel catfish.  Well it was, but it wasn’t. The catfish put up a furious battle. It only measured out to 34.5 inches on the bump board but weighed in at and enormous 26lbs. That is huge for a fish of that length. This fish is what really got me talking with some other guides, and local biologists about what is happening right now. You can see that cat in the picture below spilling eggs all over the boat! A good buddy of mine and local hardcore catfish angler Ty was out catfishing the other night from shore. He said he landed a ton of cats and 4 of them were fat females ready to pop. This has turned out to be a really interesting year.

Regardless of whether the catfish are spawning, the fishing is hot right now so if you have been on the fence about booking a trip with Blackwater Cats give us a call NOW! and take advantage of the best catfishing for the year! We have several openings available for the next few weeks.